Time is the most elusive yet dominant concept in the human experience. We struggle to understand it and we struggle to control it, yet our endless awareness and fear of time lurks behind all our endeavors. So, we invent devices to measure time. We create currencies to measure our productivity over time. We guard our time, we gift our time, and ultimately, we often waste our time. Some even invest themselves in cosmetically attempting to hide or surgically alter the deleterious effects of time. But eventually we all run out of time. Then we memorialize the time that was.

We endlessly attempt to control time. Go ahead, do a web search of books on time management! Pop culture is filled with odes to our engagement with time. Time by Pink Floyd, Time Is on My Side, Rolling Stones, Time in A Bottle, Jim Croce, etc. It is virtually impossible to scan your local television channels, on any day at any time, without being able to find a show or movie that involves time travel, the ultimate fantasy of control over time.

This week is Shabbat HaChodesh, Judaism’s sublime recognition that the Holy One has given Israel mastery over time! First let me say that every shabbat affords us the opportunity to take control of our time, though few afford themselves the luxury of this gift. But HaChodesh celebrates the first commandment given to Israel to observe as a liberated nation, a command that will allow the keeping of every shabbat, every liturgical holiday, as the anticipation and declaration of prophetic renewal.

This coming Shabbat, in addition to reading the weekly portion of Tazria, we also read an additional maftir from Shemot chapter 12. There is also a special Haftarah from chapter 45 of the prophet Ezekiel, but I think this is better understood if we first discuss the maftir. Adonai spoke to Moses and Aaron in the land of Egypt and said: “HaChodesh, this month is lachem (for you) the first of the months, the first of the months of the year.” (12:1)

I have emphasized the word lachem to indicate that the celebration of the New Moon (HaChodesh) is a unique and special gift for Israel. While other tribal nations accounted for the passage of time using the repetitive cycles of nature, this mitzvah stands out conspicuously. So why does Adonai make this declaration and why do so right before Pesach and Israel’s liberation?

The first day of HaChodesh of Nissan (the first month on the biblical calendar not a Japanese auto company) is the real New Year’s Day (Tishrei when Rosh Hashanah occurs is the seventh month). It ushers in spring, renewal and the rebirth and blossoming of nature. It is a real beginning. Slavery in Egypt was a kind of death for the Jewish people and the Exodus is a resurrection, the beginning of a renewed life. I think it is worth noting that chodesh (month) and chadash (new or renew) share a common root and form a fascinating and poetic alliteration!

The new moon elaborately illustrates the hitchadashut (renewal) of Israel. The moon waxes and wanes, each month renewing itself. Adonai is informing Israel that the observance of HaChodesh is the key to the performance of all the other mitzvot. Each mitzvah kept today should be different from the way in which it was kept yesterday. The Pesach that we will celebrate this year should be on a higher level than the Pesach that we observed last year. Our lives should be an upwards spiral, arriving at the same point in the yearly cycle as last year but on a higher level. This was different than all of the other nations that saw life as an endless cipher of time, winding down and eventually evaporating.

The Holy One paradoxically gives Israel sovereignty over time contingent upon His blueprint and ultimate guidance.  The Holy Blessed One said to Israel, “In the past they were in my hands. But from now on they are in your hands…” (Shemot Rabbah 15)

This brings us to the special haftarah assigned to Shabbat HaChodesh. It is quite appropriate that this prophetic portion depicts a fulfillment of Israel’s responsibility to commemorate the New Moons and Shabbats. Taken from Ezekiel 45:16-46:18 it gives a future glimpse of a renewed Israel and a reinstatement of Israel’s liturgical calendar. In prophetic snapshots the prophet vividly declares that Israel will follow Adonai’s precepts and gain mastery of time and destiny.

The fulfillment of these pictures have been hotly debated over the past two millennium following the destruction of the 2nd Temple by the Romans in 70CE. Some take this passage quite literally and long for the building of a Third Temple and as the ultimate fulfillment of Adonai’s timetable.  I find this somewhat improbable for two reasons. First, I cannot imagine that the hope of Israel and the world is tied to the archaic tradition of animal sacrifice. If we were to accept the entire passage as literal, then these also would be part of the package. I find it impossible to imagine a day where “the wolf will dwell with the lamb…” (and the lamb will get up to tell about it) and humans will still be engaging in hideous ritual bloodbaths.

Secondly Ezekiel’s normal mode of communication are extravagant illusions that illustrate realities that are greater than our present realities. The opening vision of the Merkabah (chapter 1) and the Valley of Dried Bones rising from the dead (chapter 37) should indicate that Ezekiel must be taken seriously not literally.

Most importantly if we are to take Ezekiel as seriously as we should it is imperative that we do not miss the forest for the trees. That is we cannot overlook the important symbolism of this portion. In this special haftarah the Kohen offers the sacrifice as prescribed, but the sacrifices and in fact the entire means of commemorating the New Moons, the Shabbats, the Pesach and Sukkot are all provided by the Nasi (the ruler). What this indicates is a time is coming when governance will not be hostile to the observance of Adonai’s highest standards, rather there will be a perfect marriage between the secular and the religious. This means that there will be trustworthy and benevolent rule. “…the Nasi will not take from the inheritance of the people to rob them of their holdings.” (v.18)

What if the Nasi and the Kohen were truly embodied in one person? For that matter what if he lives and gives of his own inheritance sacrificially? What if he is the living sacrifice modeling the sacrificial lives we are to lead? What if he embodies the entire Mikdash (Temple)?  What if he gives us our true inheritance…mastery of time? Is it possible that all of history, all time and therefore all of our hopes and aspirations collapse on one personage?

But when Messiah came as Kohen Gadol of the good things that are now already here,  he went through the greater and more perfect Mishkan that is not made with human hands, that is to say, is not a part of this creation. 12 He did not enter by means of the blood of goats and calves; but he entered the Most Holy Place once for all by his own blood, thus obtaining eternal redemption. 13 The blood of goats and bulls and the ashes of a heifer sprinkled on those who are ceremonially unclean sanctify them so that they are outwardly clean. 14 How much more, then, will the blood of Messiah, who through the eternal Spirit offered himself unblemished to God, cleanse our consciences from acts that lead to death, so that we may serve the living God! 15 For this reason Messiah is the mediator of a new covenant, that those who are called may receive the promised eternal inheritance—now that he has died as a ransom to set them free from the sins committed under the first covenant. (Hebrews 9:11-15)

Apparently, it is all about time. 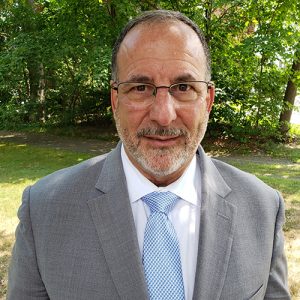